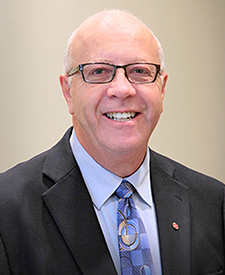 Dr. Gardner became interested in the dental profession because of his own life experiences. All through his childhood and teenage years he suffered from a severe malocclusion (bad bite). Because of a very asymmetrical face and contact only with three upper and three lower teeth, orthodontic treatment and two major surgeries were required to correct his dental and facial problems. As a result, there are very few dental procedures that he cannot relate to in some way as a patient.

Being a native of Maury County, Tennessee. Dr. Gardner graduated from Santa Fe School, Columbia State Community College, The University of Memphis and the University of Tennessee, College of Dentistry. In August of 1983 he became the first full-time practicing dentist in Spring Hill. Dr. Gardner is a member of the Sixth District Dental Society, the Tennessee Dental Association, the American Dental Association and the Academy of General Dentistry. He is currently serving as General Chairman of the 2019 Tennessee Dental Association Annual Meeting. Dr. Gardner regularly volunteers at the Interfaith Dental Clinic in Nashville and Murfreesboro. He has been the recipient of the Nashville Lifestyles Magazine, Top Dentists of Middle Tennessee every year since 2013. This award is chosen by his peers which speaks highly of his skill and abilities (awards).

On a personal note, Dr. Gardner is very active in his church, St. Luke United Methodist in Columbia, Tennessee. He is also a member of Gideon’s International. In his spare time he enjoys playing guitar and singing with a Christian group called Our House Band, which he helped organize in 2015 with several other members of the church. He and his wife, Ginger, have three adult children, Leslie (Patrick) Finn, Stephanie (James) Harlan, Ray Gardner, and a grandson, Levi Harlan.